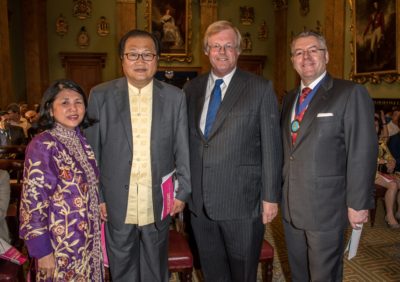 Institute of Directors, City of London, The City Livery Club, The Mulan Foundation

David Stringer-Lamarre, within his role as Chairman of the Institute of Directors, City of London was pleased to act as the ‘Master of Ceremonies’ for this high quality concert held in Fishmongers’ Hall.

It was good to speak with Sir David Wootton, Lord Mayor of London 2011/2 and Minister Counsellor Jin Xu from the Embassy of China.

The performers included many classically trained musicians from the East and West with performers from the Far East, Poland and the UK including Catherine Wong, Bei Bei Wang, Mark Oldfield, Bartosz Woroch, Laura Mitchell, Di Xiao and Daniel Amity.