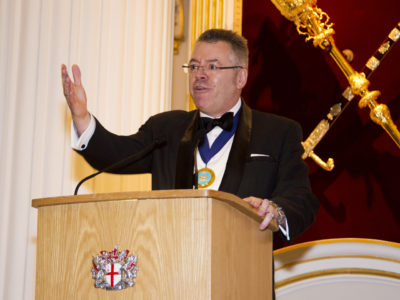 David Stringer-Lamarre, within his role of Chairman of the Institute of Directors (IoD), City of London, was very pleased to attend this annual event. It was a pleasure for David to greet each guest in the company of the IoD City of London President Alderman Sir David Wootton.

Following the dinner, David welcomed the many guests and spoke about IoD City’s continuing work in helping ‘make business happen’. He also informed the attendees about IoD City’s championing of diversity and the increase in its membership.

Lady Barbara Judge, National Chairman of the Institute of Directors, spoke about the benefits of the Transatlantic Trade and Investment Partnership and urged companies to support this.

The Rt Hon the Lord Mayor, Alderman Alan Yarrow in his speech discussed the need for the City and UK based company to be louder in their marketing messages. Companies delivered a high level of performance, but are not always as forthright about this as they could be.