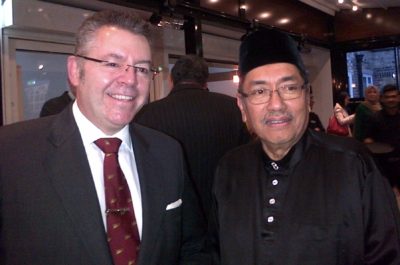 David Stringer-Lamarre was very pleased to have been invited to attend this national day reception, which brought together many members of the London Diplomatic Corp and business people.

Alistair Harrison CMG CVO, Marshal of the Diplomatic Corps spoke about the strong relationship between Malaysia and the United Kingdom.

His Excellency Dato Ahmad Rasidi Hazizi, the High Commissioner of Malaysia welcomed the guests to the events, including the Malaysian Minster of Defence and the Lord Mayor of London, Alan Yarrow.