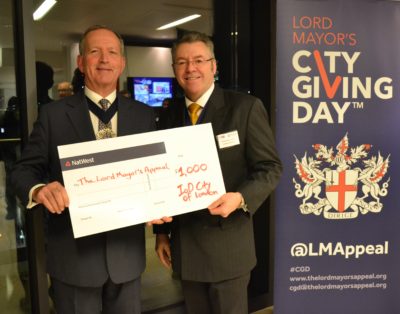 David Stringer-Lamarre, representing the Institute of Directors, City of London, was pleased to attend this event for the companies and organisations that participated in the 2015 City of London Giving Day. IoD City of London partnered with the London Capital Club to deliver a series of money raising events.

A welcome speech was made by Yu Sun, the Chief Executive, of the Bank of China, wherein he outlined the various benefits to organisations who participate in City Giving Day.

The Rt Hon the Lord Mayor Alderman Alan Yarrow thanked the organisations who had taken part and spoke about the great benefits that results from philanthropy.