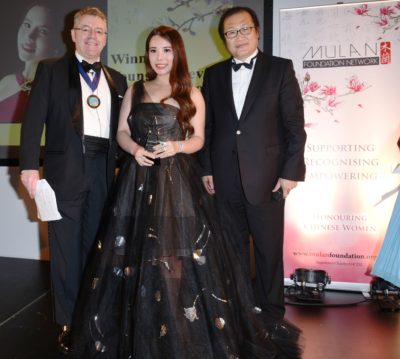 David Stringer-Lamarre, within his role as Chairman of the Institute of Directors, City of London was pleased to have been asked to act as a co-Master of Ceremonies, alongside Champa Selim, for this annual award ceremony.

A film crew from Channel 4 were present.

The Mulan Foundation Network aims to recognise and honour the achievements of Chinese women in the UK and elsewhere through Annual Awards and in the process build up a global network of top and successful Chinese women and young Chinese women on the way up, for networking, mentoring and to support and help each other as well as contribute to the wider community.

There was a fine piano recital from Catherine Wong.

David, following his successful removal of a cork from a bottle of Champagne with a sabre, was inducted into the order of the Confrerie du Sabre d’or.