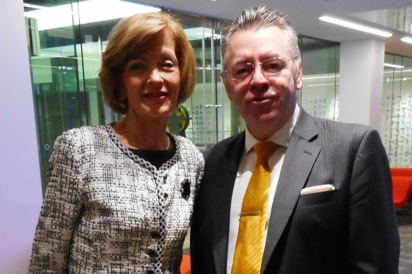 Women in the Livery

David Stringer-Lamarre was pleased to have the opportunity to conduct an ‘in conversation with Dame Fiona Woolf’, Past Lord Mayor of the City of London and leading international lawyer. Many subjects were discussed including Dame Fiona’s journey from being a student to a top City of London lawyer and Dame Fiona’s experiences of the ‘road to becoming Lord Mayor’. Several business and political topics were discussed including the number of women on boards.

The audience were invited to ask some questions, which Dame Fiona answered with typical openness.

Mei Sim Lai OBE DL, Chair of Women in the Livery, delivered the closing remarks and the vote of thanks.