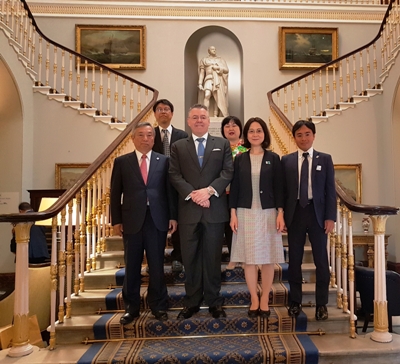 David Stringer-Lamarre. MD of FortisCL, within his role as Chairman of the Institute of Directors, London Region, was pleased to meet with a senior delegation from Hyogo Prefecture in Japan. This was lead by Kazuaki Araki, Vice Governor of Hyogo.

There was an exchange of information about the Institute of Directors, international trade and the economic & cultural activities within Hyogo Prefecture.

Kobe is the principal city of Hyogo and the prefecture has 5.5 million inhabitants.

The Rugby World Cup 2019 was also discussed with Kobe hosting several games. David spoke about the world’s oldest open rugby club, Blackheath, of which he is a Vice President.

Image: The delegation, led by Vice Governor Kazuaki Araki (first of the the left) & David Stringer-Lamarre