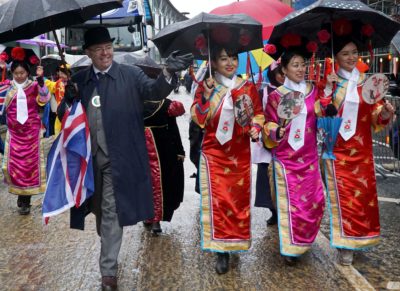 David Stringer-Lamarre, within his role as Chairman of the Institute of Directors (IoD), City of London, was pleased to join other members of the Committee as participants in the Lord Mayor’s Show. IoD City of London has a strong China Special Interest Group.

The UK-China International Exchange Association float took on the theme of East-West. 2015 is the UK-China Year of Cultural Exchange. This East West Float celebrated the importance of this collaboration. The banner of the float depicted 12 Chinese Zodiacs and the walkers were dressed in traditional Chinese costumes or English costumes/dress.

It was the 800th anniversary of the Lord Mayor’s Show, which is the world’s largest unrehearsed procession. The new Lord Mayor is Lord Mountevans.