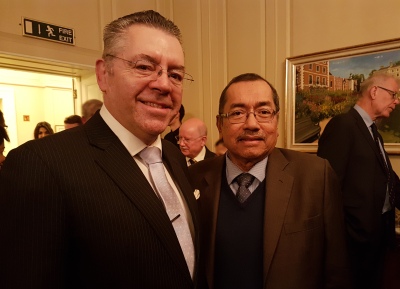 David Stringer-Lamarre, a member of the British Malaysian Society, was very pleased to attend this dinner in the Parliament Chamber of the Inner Temple, London.

The theme of the dinner was ‘Celebrating 60 years of Merdeka’.

The opening address was delivery by Chairman Dato’ Anthony Cooper.

A welcome speech was made by David Pittaway QC, Treasurer of the Inner Temple

The guest speaker was The Lord Powell of Bayswater KCMG

The vote of thanks for delivered by Sir Mark Moody-Stuart KCMG, President of the British Malaysian Society.

Closing remarks were made by Mei Sim Lai OBE DL