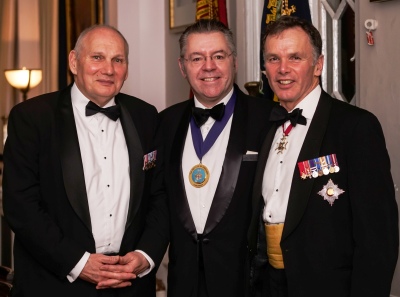 David Stringer-Lamarre, within his role as Chairman of the Institute of Directors (IoD), City of London, was very pleased to attend this dinner at the Royal Regiment of Fusiliers within the Tower of London.

IoD City of London has a strong relationship with the military and has run several events focused upon bringing people from business and the military together to further strengthen the relationship.

A welcome address was provided by Colonel Denny, Regimental Secretary of the Royal Regiment of Fusiliers. This was replied to on behalf of IoD City by David Stringer-Lamarre.

Simon Wood, IoD City Military Liaison Officer spoke about the Branch’s engagement with the military and encouraged business and military leaders present to discuss how they might work together.

Brigadier Andrew Jackson spoke about his work as Managing Director of Salute My Job.

Christopher Cooper, Director of Computer Service Centre, the Branch Sponsor, spoke about the military constantly having to adapt to change and the many similarities with business, with specific reference to the IT sector.