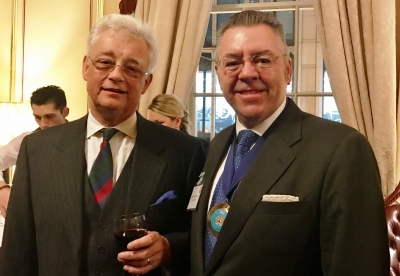 David Stringer-Lamarre, within his capacity as Chairman of the Institute of Directors (IoD), City of London, was pleased to attend this launch event. He was accompanied by Irina Velkova, Chair of the IoD City Young Executives Group.

IoD City was a keen support organisation for the 2016 Big Curry Lunch.

A welcome address by the Rt Hon the Lord Mayor, Alderman Dr Andrew Parmley was shown on the video monitor as he is currently in the Middle East.

Michael Hockney, Chairman of the Organising Committee informed that audience of the plans for the 2017 Big Curry lunch, thanked them for their support during 2016 and encouraged increased performance for 2017.