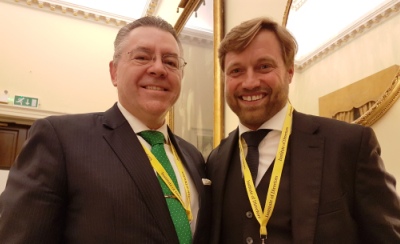 David Stringer-Lamarre, MD of FortisCL, within his role as Chairman of the Institute of Directors (IoD), London Region, was pleased to attend this dinner. It brought together previous winners of ‘Director of the Year’ awards within the London & South Regions of the IoD. The evening was convened by Alex Pratt, Chairman, IoD South Region.

The dinner provided a very good opportunity to for attendees to discuss how winning an award had proved beneficial for them and their organisations. Other topics included the role of business in society and business leadership.

An after dinner speech was delivered by Alex Thomson, around the world solo racer. He discussed his development as a solo racer including his participation in the famous Vendee Globe aboard his yacht, Hugo Boss.

David delivered the vote of thanks.