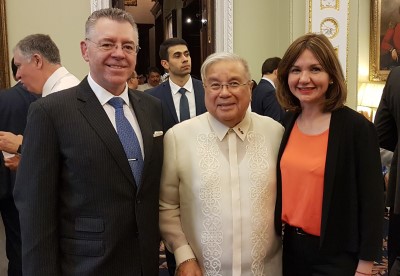 David Stringer-Lamarre, MD of FortisCL was pleased to attend the Anniversary of the Declaration of Independence of the Republic of the Philippines event. He was accompanied by acclaimed artist Helen Whittaker FMGP who has been commissioned to design the stained glass for the new Marian Chapel in Manila; press release: https://bit.ly/2XKjXgM David and Helen discussed the project with His Excellency Antonio M Lagdameo, Ambassador of the Philippines.