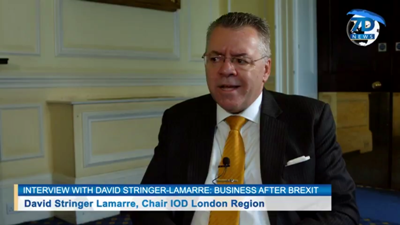 David Stringer-Lamarre, MD of FortisCL, within his role as Chairman of the Institute of Directors, London Region, was pleased to engage in an interview with 7D News.

Here is the link to the video and also to the supporting article.

A range of topics were discussed around a central consideration of Brexit. These included how British based businesses were approaching the Brexit process, scenario planning and dealing with uncertainty.

The interview, took place 12 July 2018, so there were comments made relating to the White Paper set out by the British Government.

There was also a consideration of UK business engagement with international trade, including the EU, the Middle East, South Asia, East Asia and the USA.