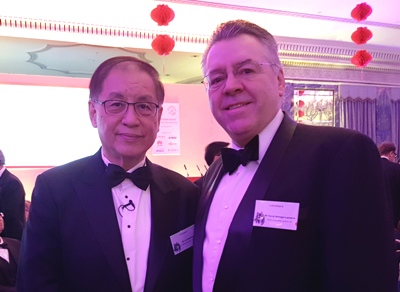 David Stringer-Lamarre, MD of FortisCL, and a member of the 48 Group Club, was pleased to attend this Chinese New Year of the Dog dinner at the Dorchester Hotel.

It was an excellent opportunity to speak with old friends and meet new ones. A hold range of topics regarding Anglo-Sino relations amid the Golden Era 2.0.

There were several speeches including by HE Liu Xiaoming, Ambassador of the People’s Republic of China, Stephen Perry, Chairman, 48 Group Club and Yu Sun, Chairman, Chinese Chambers of Commerce UK.

This year we were fortunate to hear the comments of Professor Liu Mingkang, Former Chairman of the China Banking Regulatory Commission about the Chinese and World economy.