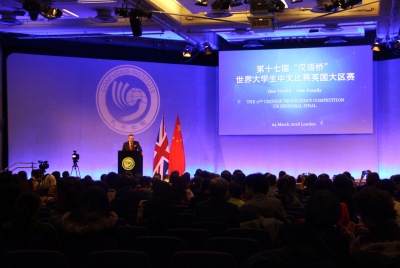 David Stringer-Lamarre, MD of FortisCL, within his role as Chairman of the Institute of Directors (IoD), London Region, was pleased to have been invited to attend and deliver a speech as this prestigious event, held at the Queen Elizabeth Centre in London.

Eleven students from UK universities competed in front of a panel of judges and the large audience. This involved a set piece speech, question & answer sessions and an artistic display.

An opening address was delivered by His Excellency, Liu Xiaoming, Ambassador of China. He noted the theme for this event was ‘one world one family’. Further that China see the world as one family and that it is better to work for a win-win solution rather than a zero-sum result.

David Stringer-Lamarre spoke about the the work of the IoD in London and its focus upon helping to ‘make business happen.’ Specifically with respect to the IoD City of London, China Special Interest Group, this included UK-China commerce. He noted the interest of UK business in opportunities relating to the Belt Road Initiative.He further noted the importance of culture and language as a creator and supporter of strong links between the two countries.