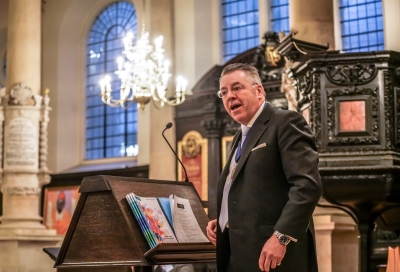 David Stringer-Lamarre within his role as Chairman of the Institute of Directors was pleased to be the Event Chairman for this timely event in the heart of the City of London. The venue, St Stephen’s Walbrook was the birthplace of the Samaritans and the first telephone used by the Samaritans is on display inside the church.

During his opening remarks David spoke about the importance of mental health and wellbeing to business and society noting the recent report by the IoD ‘Mental Health Matters’.

The Reverend Sally Muggeridge is curate of St Stephen Walbrook. Sally has worked at Board level in several major international plcs including British Telecom, Cable and Wireless, Pearson and Total. She served as Master of the Worshipful Company of Marketors in 2013/14 and is Chaplain to the Lady Masters Association.

Felicity Varah Harding is an ambassador for Samaritans and the daughter of their founder, Prebendary Dr Chad Varah CH, CBE. She has a long and varied career in social and therapeutic work and has performed various roles within the voluntary and charitable sectors – including with Voluntary Service Overseas in Anguilla, a non-executive role for National Victim Support and trustee and later Chair of Vision Aid Overseas.

John Binns is a Non-Executive Director with the City Mental Health Alliance and Vice Chair and Trustee of Mind. A former Partner with Deloitte, he is now nationally and internationally recognised as an independent advisor to high performance organisations and individuals on mental health, wellbeing, and personal resilience. John is a qualified CBT coach.

Colonel (Retd) Simon Diggins OBE served for over 36 years in the British Army from 1978 to 2014 after which he was a Director of Strategy and Campaign Consulting before joining the NHS in 2016. He is currently a Children and Adolescent Mental Health Services Manager at South London and Maudsley NHS Trust. Simon spoke about the work of the London Veterans Service.

Closing remarks were delivered by Garry Bernstein, Vice-Chairman, IoD City of London and a Trustee of Central London Samaritans.

Net proceeds from the event were donated to The Lord Mayor’s Big Curry Lunch 2017 in aid of ABF The Soldiers Charity.