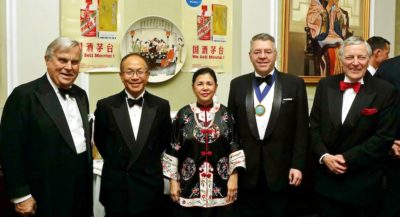 All three were present at this dinner. Sir David Brewer KG CMG CVO JP spoke on the topic of ‘UK China – A Personal Perspective’. Andrew KP Leung shared his views about the relationships between China, Hong Kong and the UK. Mei Sim Lai OBE DL spoke of the various activities of the China Group since 2006 and outlined plans for future events.

David Stringer-Lamarre reflected upon the economic and cultural links between the UK and China, noting the opportunities presented during the Golden Era and One Belt One Road. Mention was made of ongoing development following the result of the EU referendum.