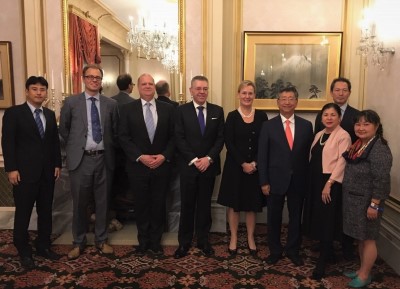 David Stringer-Lamarre, MD of FortisCL and Chairman of IoD London Region said that it was a pleasure, alongside a team from the Institute of Directors (IoD), led by Chair Charlotte Valeur to meet and dine with HE Koji Tsuruoka, the Ambassador of Japan and his team at the Residency.

He said that a tour of the Residency provided an opportunity to observe and admire many Japanese works of art including painting, calligraphy and pottery.

There were several discussions about relations between the UK and Japan. A key topic was further strengthening the contact between business people in both countries. The upcoming IoD London Region event ‘Japan-UK Growth Opportunities’ will certainly contribute to this.