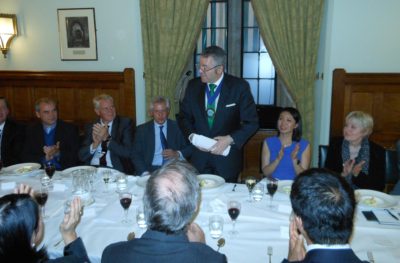 David Stringer-Lamarre, within his role as Chairman of the Institute of Directors (IoD), City of London, was pleased to speak to the members of the House of Lords, the House of Commons, IoD members and guests. He provided an update on IoD City and some comments regarding the present and future business relationship between the UK & China.

Richard Graham, Chairman of the All Party Parliamentary China Group, delivered the welcome speech introducing the Members of Parliament and outlining the history of the dinner, which brings together political and business leaders.

Mei Sim Lai OBE DL, Chairman of the IoD City of London, China Group, spoke about forthcoming events including IoD City participating in a float in the Lord Mayor’s Parade in November 205.