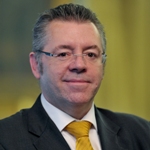 David, the Managing Director of Fortis Consulting London, is passionate about effective engagement, innovation & organisational performance, with a strong focus on outcomes. He has wide experience of consultancy & management development. Working within a ‘win-win’ framework David enjoys connecting organisations.

He is the Chairman of the Institute of Directors, London Region, a high profile group of business leaders; there are approximately 6000 members. David frequently engages with members of the Central Government, Regional Government, Local Government including The City of London Corporation, diplomats, business leaders and their senior teams, to discuss how to drive up business performance.

As well as having a successful background in operational management, David has designed & led several organisational change programmes, putting robust planning & effective communication at the centre of them.

He can often be seen at events in London. Recently he has spoken within the Mansion House, the House of Lords, the House of Commons, Chartered Accountants Hall & the Law Society.

David has wide experience in the design and delivery of corporate consultancy and management education. He holds several degrees including Law and an MBA. David has worked with many medium and large organisations, UK based and multi-nationals. Start-ups and scale ups, including those looking to enter the UK market, are a growing area of activity.

David is an Honarary Senior Visting Fellow at Cass Business School, London. He is a Visiting Professor at Guildhall School of Business & Law, London Metropolitan University.

David holds the Business Cultural Trainer’s Certificate and has travelled in over 70 countries. He engages with many international business groups including from China, USA, Slovakia, Estonia, UAE, Poland, Peru, Malaysia, India and Thailand.

He is a Court Member (Executive) and Committee Chairman of the Worshipful Company of Glaziers in the City of London, an ancient Livery Company whose existence was first recorded in 1328.

David is a Fellow of the Institute of Directors (established 1903 & Royal Charter awarded in 1906), a member of the Bank of England Institute of Directors Panel, the City of London FinTech Action Network, Tech London Advocates, The 48 Group Club ‘The Icebreakers’, the British Malaysian Society, the Austrian Business Circle, the Arab Women of the Year Awards Advisory Board, the Chinese Business Leaders Awards Judging Panel, the Imperial College Business School Alumni Financial Services Group, the Cass Business School Entrepreneurs Network and a Vice President of Blackheath (Rugby) Football Club.